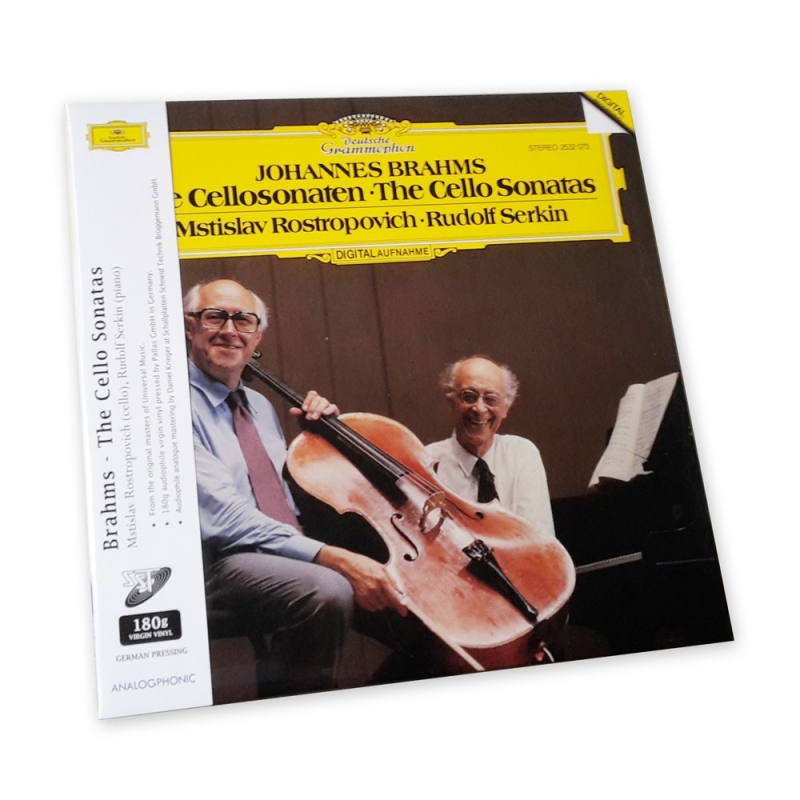 Our younger generation of cello soloists seems to favour a tone production which balances a refined upper range with a middle and lower register that’s strong and well focused, rather than expansively rich and resonant. Readers will not need to be told that Rostropovich’s soloimage is definitely not of this ilk: his musical personality is in every sense larger than life and in this magnificent coupling of the cello sonatas, in partnership with Rudolf Serkin, the very forward balance of the recording exaggerates this impression in the most vivid way. Bycomparison the piano image – to the right of and behind the cello – is more reticent in timbre and seldom matches Rostropovich’s rich flood of sound, which isn’t, of course, to suggest that Serkin fails to project the music, merely that the microphone placing makes Rostropovichvery much the dominating artist. This passionately warm-hearted and ripely Brahmsian music-making almost overwhelms the listener in its sheer impact. But with playing of this calibre, with both artists wonderfully attuned to each other’s responses, every nuancetells and Brahms’s bold melodic lines soar out from the speakers to capture the imagination, and provide an enthralling musical experience in each and every work. - The Gramophone Magazine

There is no clear dividing line to be drawn in Brahms between the symphonic and chamber music styles. At the outset of his career, Robert Schumann, in the prophetic article "Neue Bahnen" (New Paths), described Brahms's instrumental compositions as "veiled symphonies", while Adorno wrote of teh chamber-music character of the symphonies. Finally Schoenberg, who inaugurated a new era in the understanding of Brahms with his essay "Brahms the Progressive", made an orchestral version of the Piano Quartet in G minor, Op. 25 - yet another testimony to the close relationship between the two genres in Brahms's musical thought.

Twenty-four years lay between the dates of composition of the two sonatas, so it is not surprising that the F major Sonata is perceptibly more "symphonic" than the more lyrical earlier work. But even in the ballad-like E-minor Sonata the deployment of three traditional types of structure - sonata-form first movement, ternary song form, and fugue - is a factor of great importance. The second movement, a melancholy "quasi Menuetto", is particularly charming with its outer sections in the manner of a 'valse triste' enclosing a Landler-like central episode. The imposing finale - is it perhaps a tacit homage to J.S. Bach? - is based on a theme and that could have been taken from the "Contrapunctus 13" of The Art of Fugue.